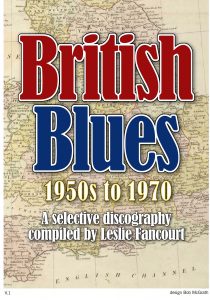 This selective discography – now updated (Version 2 – May/June 2021) which is downloadable here was first published by discographer Les Fancourt in 1989 and was last published in print in 1992.

The discography has now been updated and covers the late 1950s blues scene, through the R&B boom of the early 1960s, and onto to the British Blues boom of the late 1960s.

A number of the bands and artists in the discography started out playing blues and R&B and many became rock stars in their own right.

This discography only contains details of British artists and bands own recordings and omits their original recordings made with visiting US blues artists.

These artists are covered in other published discographies notably The Blues Discography 3rdEdition.

The British Blues Discography discography, which is a work in progress, will be updated – so readers, collectors and visitors to the site are encouraged to send corrections, additions, edits etc to the author Les Fancourt at the email address shown below. All contributions will be acknowledged.

Please do not send emails with comments, additions, edits and corrections to Blues & Rhythm.

When an updated edition of the discography is published on this web site notification will be posted on social media and in the B&R magazine small adverts section.