Blues & Rhythm was first published in July 1984 continuing the long tradition of blues magazine publishing in the UK, which dates back to the early 1960s with magazines such as R&B Monthly, Hot Buttered Soul, Blues World, Shout! and the daddy of all blues magazines, Blues Unlimited. 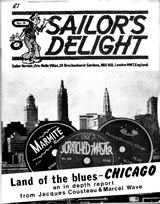 The origins of Blues & Rhythm Magazine lay in two magazines: the irreverent Sailor’s Delight and Pickin’ The Blues.

Sailor’s Delight was predominantly a record sales and auction magazine selling 78s, 45s and albums published by Paul ‘Sailor’ Vernon. The magazine included spoof articles and genuine research on blues and R&B. Sailor’s Delight ceased publication after seventeen issues when the first issue of Blues & Rhythm was being planned. 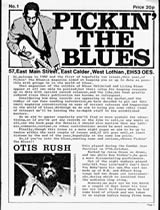 lues & Rhythm was an A5 sized magazine, but by issue 19 we switched to A4 size. Blues & Rhythm publishes a 48 page magazine, ten times a year, using full colour.