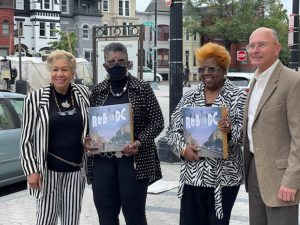 Click on the link here to see great TV news feature on the ‘R&B in D.C. 1940-1960’ set from Bear Family. Sandra, Carrie, and Grace of The Jewels kindly came out to support the video session, and even sang a couple songs for the reporter, Mark Segraves.

Sean McDonald and Jontavious Willis cover of Tommy Johnson’s “Cool Drink of Water Blues” from 1928 later redone by Howlin’ Wolf in 1956 as “I Asked for Water (She Gave Me Gasoline)” . Hope you enjoy our take on the original!

From circa 1969 – Fats Domino with The Byrds

Steve Gibson & His Red Caps From 1948 – Suggested by Tony Watson

Great R&B from a great band. Still going strong some 30 years after forming.

The great, tragically underrated Little Jimmy Scott on a modern classic, ‘Nothing Compares To You’ Chosen by Tony Watson

Nino Tempo plays “Horn Rock” from the 1957 film “Bop Girl Goes Calypso,” which many people believe to be the highlight of the movie. This was Nino’s first film appearance in which he played saxophone…he was 22 years old.

American Epic Teaser: The new American Epic series will be broadcast on BBC Arena later this year. The films capture the history of American music in beautiful detail. The documentary trilogy is the story of how and why American roots music came to be recorded in the 1920s, and is narrated by Robert Redford. It features some gorgeous restored archive and the music is just phenomenal.

Grandpa Elliott and the Playing for Change Band at the Lake Eden Arts Festival, October, 2010. Thanks to Byron Foulger and Phil Wight.

This rare live footage was posted on YouTube. It was owned by the blues singer Clara McDaniel. Dusty Brown (aka C.W. Triplett) was born in Tralake, Mississippi, on 11th March 1929. He had been in Chicago since 1946, working as a cab driver until he took up music in 1953. Playing in various West Side clubs, he cut his Parrot session on 1st October 1955. The session was the first of his career. Playing blues harp, Brown is supported by Henry Gray on piano, Joe Little on guitar, and drummer Johnny Sturdivant. Brown’s next session was for Bandera in 1959. Submitted by Byron Foulger.

THE MEDITATION SINGERS FEATURING LAURA LEE – Jesus Be A Fence All Around Me. Great gospel the way it should be. Thanks to Byron Foulger

MIKE VERNON & THE MIGHTY COMBO – All By Myself. Legendary blues producer Mike Vernon now has his own hot rocking’ jump band, which consists of some of the best players the UK has ever produced.

STEVE GIBSON & THE RED CAPS – Cow Cow Boogie. Pure madness from this long-lived group. From The Ed Sullivan Show, 1952. Fascinating and essential. Thanks to Fred Goulding.

SONNY BOY WILLIAMSON & ROBERT JR LOCKWOOD – Silent but Fascinating footage of a King Biscuit Show from 1942. Thanks to Nick Amster

LOUIS JORDAN – Ain’t Nobody Here But Us Chickens – One of his last filmed performances in 1974 showing that at 68 he was still rocking and socking like crazy. Filmed by French TV. Thanks to Steve Armitage for sending this in.

JACKIE WILSON performing ‘She’s All Right’ on the Shindig show in 1964, accompanied by The Chambers Brothers. What a magical performer!

FATS DOMINO – You Can Pack Your Suitcase – Live, France, 1962 – a great long clip of Fats with Roy Montreal, Herb Hardesty, Earl Palmer, Lee Allen and the full Bartholomew band. Sent to us by Bob McGrath

Doug Price sent us this wonderful clip of MOTHER WANDA COBBS  playing ‘Walk With Me Lord’,  Circa 2013. Amazing stuff!

SHERWOOD FLEMING & MILTON HOPKINS at Justine’s Brasserie, February 11th, 2014 Austin Texas, part of the Eastside Kings Festival. Great performance by blues veteran Sherwood who has a new CD due in 2015 on Dynaflow. (18-01)

TOM BALL ‘Nagasaki Sails From Uranus’ by the Tom Ball Harmonica Orchestra – check it out – it’s a bit different!

THE DELLS – The Mighty Mighty Dells, still in great voice, 47 years after they started out! A Tony Watson pick!

THE RAVENS – Fantastic and rare 1940s footage, including Jimmy Ricks on bass! A Tony Watson pick!

JUNE RICHMOND WITH ROY MILTON’S BAND. Probably made in the late 1940s. Milton’s band was a great jump outfit picked by Phil Wight. (13-9)